Most planned trips have this rule: Expect the unexpected no matter how precise the trip was planned. A slight delay with the flight could mean the cancellation or postponement of an important business meeting. Several minutes delay could destroy the day altogether.

Our itinerary for the Sabbath of our trip was a short hike up Mt. Hibok-Hibok, one of the mountains in the island of Camiguin. Next was a trip to either the sunken cemetery or the famed White Island. We would cap the day by another dip in the hot springs of Ardent Springs.

We never got the chance to go the last two in our itinerary.

Though, dismayed and exhausted, the experience we had with Mt. Hibok-hibok could never be exchanged for anything else. 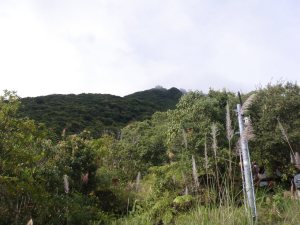 Mt. Hibok Hibok stands 1, 332 meters. It is a stratovolcano in the Island of Camiguin that erupted in the 1950s.  It normally takes 3–5 hours to reach the summit; the usual jump-off is Ardent Hot Springs in Mambajao. Views from the summit include the nearby White Island; Bohol (N); Eastern Mindanao (E); and Siquijor (W). (source: Wikipedia.com)

We left TESDA at 5:30 AM. Along the way, we bought food and drinks for breakfast. No shops were openn yet with the exception of the Vjandep’s Bakery and an almost empty grocery. We had no choice but to buy from the only two shops that are open. Thus, all of us brought bread, the only available food in each store. 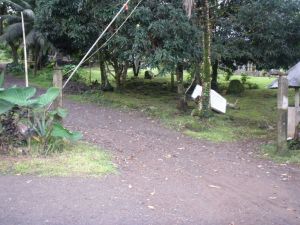 With these and some personal stuff we brought along, we started our ascent at 6:00 AM in front of Ardent Hot Spring. We had two very reliable guides for this trek. They served as the lead pack and the middle pack while most of the guys (me included) were sweepers. The first leg of the trail was a foretaste of what we were going to climb. Huge boulders were spaced far apart with a steep elevation of approximately 45 degrees. We used even our hands and legs to climb from one boulder to another. The next leg was a coconut field and a corn field. 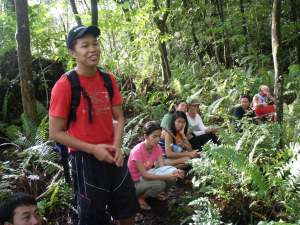 It was a calm before the storm. Upon reaching the end of the field, we entered into a lush coniferous forest with lots of ferns, large trees and tall grasses. After almost an hour of traverse, we stopped for a while to have our Sabbath School Program. We packed up after 45 minutes. By 8:00 AM, we arrived at another 45 degree slope.

This time the rocks were slippery with the moss and lichen covering most of the rock. Then the terrain changed from tall grasses to moss covered rocky slopes. Eventually, we found ourselves climbing once more slippery boulders similar to the first leg of the trail. This went on until we reached the peak.

Once more, I became aware of my great need to exercise and keep myself fit. While scaling the boulders, my knees were ready to give way. I could feel the tension on my muscles. At the same time, my clothes were covered with sweat. Fortunately we were not carrying heavy back packs. I for one only brought water and some bread during the climb. One thing I learned from past hikes, always try to have trail food especially chocolate or anything sweet to spike up my energy level to endure the tension while hiking.

By 9:30 AM, I was energized by the sight that I saw. On one clearing, we saw the shore line of the island, and the length of the route that we have traversed. The island looked really simple from this angle, it was just a thin line of beach, a small area for houses and the rest was green fields of grass, trees and what not. This fueled me up to try continue the traverse, it was renewed hope even though an hour later, we were still yet to reach the peak.

By 12:00 noon, we reached the peak and like most climbs, the sights on top and the feeling of being on top was the most rewarding of all. After some picture taking, we were ready to search for an area to conduct our major purpose on this site: worship.

We had a wonderful Divine Worship service. Pastor Don Moredas reminded us of being faithful and learning to trust Jesus through the illustration of Jesus calming the storm. We reflected on the climb up as something that mirrors life that as we try our best to reach the top, the pitfalls and the exhaustion are also similar with the problems and hurdles in life. Lunch came next. Since we were carrying nothing but bread, we ate and drank our fill. Our guides brought rice that we shared among the 15 of us. It wasn’t much but it was somehow filling, or so we thought.

The descent was slippery. None of us went down without a scratch or a moment of sliding down. Some were sliding down huge boulders. Others received their injury from the sharp tall grass that flanked the trail. It was tiring. It was painful. Yet we still tried to move on. Apparently some of us were near fainting. Lack of proper nourishment and liquids could really weaken even any experienced hiker, more so to us amateurs.

Along the way down, I was taught the proper way of descending when in a forest. If the rocks are too far apart, try walking like a crab, sideways. Most people would sit down and try to reach the lowest point possible to climb down, or others would face the rock and try to use their hands and feet to crawl down. I was doing that very thing, but I learned that it spends more energy. Walking sideways used lesser energy but produces similar results. Next, I learned how to run and jump down using little steps and using the trees as break. I was taught to lean forward with bent knees, and then look for the sturdiest looking tree (most likely the stoutest trunk or branch). Afterwards using small but rapid steps or hops charge downward and then brace yourself to grab hold on to your target tree. That would use lesser energy and faster descent. However, this could only be used when the trail is a downward slope.

It was already dark by the time we reached the coconut fields. The only light we had been from our cell phones. It was only enough to show the trail we were following but not enough to see beyond that. I was at the end of the pack, walking in front of me was one of our companions who had depleted all his energy and will power. I, myself, was also descending on sheer will power and trust in God alone. If the trail had been longer, I might have collapsed as well.

By 6:30, we reached our jump off point. We were all exhausted, dehydrated and hungry. We immediately entered Ardent Hot Springs where food was already prepared by one of our members who didn’t join the trek. We ate with much gusto, we even finished a bag full of lansones.

The night ended with a deep in the hottest spring in the resort. It was comforting and relaxing. After a day-long hike, it was nice to dip the body in really warm water so that the next day, the pain would be more tolerable.  It did wonders for me. Moreover, it was better when the water was heated naturally via the vents on the ground, once more reminding all of us that we were standing on an active volcano.

The steep climb, the rocky slopes, and the slippery slopes combined to take us on an adventure by earth.  It was tiring but at the same time fulfilling and refreshing. To commune with God on top of the mountain is not a guarantee that you are close to God, instead it shows you how much God wants to be close to you. Once on top of any mountain, the sight that you see proves that.